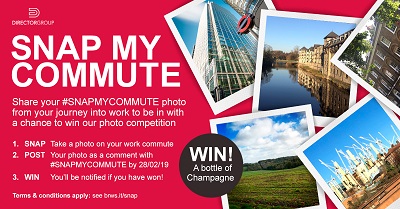 David Wright was delighted to announce today on LinkedIn that his much awaited competition ‘Snap My commute’ has finally taken off.

The idea came from taking a photograph of the Battersea Power Station Development on his way into London. David, a regular commuter, had made previous attempts to take a photograph of the construction site with its impressive coronet of cranes but had never achieved a clear shot.

Sharing the image online, the idea struck him that a competition to brighten people’s daily ‘commute’ would be worthy of anyone’s time. With almost 200,000 comments and messages stimulated by this post it seems many people shared his viewpoint.

For that reason, Director Group, have sponsored the competition with a bottle of champagne awarded to the best UK entry and another for an overseas entry. We hope to run the competition on a monthly basis and look forward to seeing your photographs.

If you would like to take part in this competition, simply comment on David’s LinkedIn competition post with a photo of your commute, along with the hashtag #SNAPMYCOMMUTE .

This website uses cookies to improve your experience while you navigate through the website. Out of these, the cookies that are categorized as necessary are stored on your browser as they are essential for the working of basic functionalities of the website. We also use third-party cookies that help us analyze and understand how you use this website. These cookies will be stored in your browser only with your consent. You also have the option to opt-out of these cookies. But opting out of some of these cookies may affect your browsing experience.
Necessary Always Enabled
Necessary cookies are absolutely essential for the website to function properly. These cookies ensure basic functionalities and security features of the website, anonymously.
Functional
Functional cookies help to perform certain functionalities like sharing the content of the website on social media platforms, collect feedbacks, and other third-party features.
Performance
Performance cookies are used to understand and analyze the key performance indexes of the website which helps in delivering a better user experience for the visitors.
Analytics
Analytical cookies are used to understand how visitors interact with the website. These cookies help provide information on metrics the number of visitors, bounce rate, traffic source, etc.
Advertisement
Advertisement cookies are used to provide visitors with relevant ads and marketing campaigns. These cookies track visitors across websites and collect information to provide customized ads.
Others
Other uncategorized cookies are those that are being analyzed and have not been classified into a category as yet.
SAVE & ACCEPT
Powered by